I’m sure you’ve seen this meme or some variation on the theme: 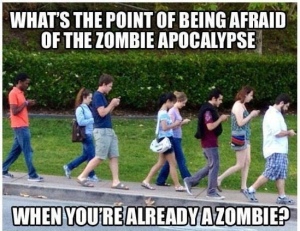 (ganked from here although I suspect it originated elsewhere)

If you took the phones out of this picture and inserted, say, books or newspapers*, would it seem quite so apocalyptic? Because, you know, cell phones are books plus a whole lot more. The kids in the photo are reading and writing and interacting and basically doing the sort of things grumpy old fogies complain that kids don’t do anymore. Oh sure, they might be watching videos or playing games or listening to music, but that’s called “participating in culture**”, which, again, doesn’t strike me as something we ought to find alarming.

Personally, I don’t see the problem. It seems to me that “reading” and “writing” are useful skills and maybe we ought to encourage their practice rather than explode in a fit of hyperbolic panic about it.

* Ok, this is probably a whole ‘nother subject, but I could not disagree with the linked post more. I agree that “newspapers” and “cell phones” are not literally the same thing, but beyond that? Let’s go point by point:

No one at a table ever reached into their front pocket to pull out a newspaper while you were talking to them.

Well, no, most people didn’t keep their newspapers in their front pocket. On the other hand, I’ve seen the “pull out a newspaper and put it between you and the unwelcome talker” move in countless films and television shows.

Newspapers never vibrated or chimed to get your attention (and no, that waif on the corner shouting “Extra! Extra!” doesn’t count).

I think I’m safe in saying that this distinction is an artifact of the difference in technology rather than any intrinsic difference in the media. By this I mean: I strongly believe that, had it been possible to do so, newspapers would have had this capability. The did, after all, have newsies shouting “Extra! Extra! on the corner. You don’t get to arbitrarily discard information that hurts your argument.

There’s a finite end point to reading a newspaper, and it usually took no longer than 45 minutes to get there.

Again, this is a bug, not a feature. but regardless, don’t see how this is a material difference. A short book has fewer pages than a long one-they’re both books.

But the most important difference is what happens after the newspaper was done: people talked to each other about what they’d just read. They could engage in a civic discourse about the news of the day, because they were all reading the same basic material.

Is the suggestion that people don’t talk about what they read now? Because I think that’s bullshit. Ok, so we’re no longer restricted to a single source of information or a single, local group of people with home to discuss it. People can still have discussions with peer groups if they want to talk about an item with other people who’ve read it. I fail to see how being forced to read a single source is in any way a more desirable thing. These days, people can choose to read the same sources, or they can find other sources. I regard that as an improvement.

I’d also like to add that, as an introvert, having something to read so you aren’t approached by people is a godsend. Newspapers were good, but as the author noted, the amount of material was relatively limited. Having a device I can look at to deflect unwanted attention makes public transportation much easier to take.

** And please, don’t stick the word “popular” in front of “culture” in an attempt to make it seem inferior to “Culture-with-a-capital-C.” Classical music, opera, ballet, and their ilk are all fine if you’re in to that sort of thing, but they’re niche forms of entertainment and not representative of modern society’s tastes.